Vlad's Castle is a secret area in Spelunky 2.

Vlad's Castle spawns in the backlayer of either 2-2, 2-3, or 2-4 of Volcana. It is typically entered via a backlayer door in a red brick structure at the very bottom of the level.

A Drill spawns on the top row of the level Vlad's Castle spawned in. Placing the Udjat Eye in a nearby socket activates the Drill, boring a large hole through the bottom of the level and leaving a climbable chain down to the entrance to Vlad's Castle.

Entering the backlayer containing Vlad's Castle triggers the message "Your blood begins to run cold..." Beside the entrance to the backlayer is a Four Leaf Clover.

Above the entrance is a small cave system, before reaching the castle itself. The bottom of the castle contains four Coffins, Conveyor Belts, and a pit of Spikes. Ascending past this section to the middle portion of the castle is an area containing Arrow Traps, and a room accessed via Sliding Walls that can treasure, Chests, Crates, and the level's Curse Pot.

At the very top of the level is the Crown on a statue. Vlad himself rests above the statue, who drops Vlad's Cape if killed. 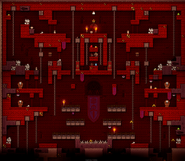 The entirety of Vlad's Castle.

The entrance to Vlad's Castle from the Drill.