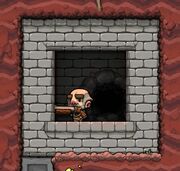 Vaults are small enclosed rooms filled with large amounts of treasure that occasionally generate deep underground, presumably containing the massive profits earned by the Shopkeeper's Association. A significantly larger vault exists within Madame Tusk's Palace of Pleasure, where her earnings are hoarded under the close eye of her and her Bodyguards.

Vaults can appear on any non-special and non-boss levels, with the exception of the first level in the Dwelling. Only one vault spawns per world, and as such the player can only encounter a total of 6 vaults throughout a single run.

Every vault consists of an outdoor area containing an 'on guard' Shopkeeper with their Shotgun out, and a sizeable interior containing two chests containing loot.

Destroying a vault tile or merely entering either section of the vault will cause the Shopkeeper to anger.

The two chests within a vault are both filled with 6-8 random large gems each, together yielding 12-16 gems, a total of approximately $20,000 if plundered in the Dwelling.

Additionally, four gold coins and a Shotgun may be looted from the Shopkeeper guarding the outside of the vault.

The value of the gems in a vault can be roughly quadrupled by ghosting them into significantly more valuable diamonds, producing 12-16 diamonds worth at least $60,000 and at most $80,000 in the Dwelling.

Within Madame Tusk's Palace of Pleasure in Neo Babylon, a player can find a massive vault containing a whopping 8 vault chests. Ghosting the contents inside will net the player from $540,000 to $720,000, typically averaging around $630,000. This vault is the best in the game and spawns consistently on 6-3 of Neo Babylon if Tusk herself was not killed earlier in Tide Pool.

Tusk and her many Bodyguards will not anger if the loot inside is taken, and will only anger if the player destroys a portion of the palace in order to access the Vault. Due to this, it is possible to ransack the vault without angering Tusk by Teleporting inside.

The vault may also be plundered with the help of a thief named Sparrow, as if the player followed all previous steps of her questline, she will kill the two Bodyguards stationed by the vault and leave the door to the vault open for the player. From here, the player may bypass the three Forcefields in their way through any means necessary and choose to split the treasure with Sparrow, earning a Corpse Bag containing 24 rope in the process.

Raiding Tusk's Vault is one of the most straightforward ways to instantly gain massive amounts of money for high score runs and the "Millionaire" achievement. However, its location in the game generally makes it only worth raiding when aiming for a high score, as the only place that the player will be able to spend their spoils is in the Sunken City, in Shopkeeper Shops, or at the Sun Challenge.