Van Horsing is a quest NPC in Spelunky 2.

In Volcana 2-1, Van Horsing can be found in a locked cell somewhere in the level. An accompanying room containing a key in its backlayer also spawns elsewhere in the level, although any standard key or the Skeleton Key can be used to open the door. Freeing Van Horsing will have him thank the spelunker, handing them a Diamond.

If Van Horsing was talked to in 2-1, he appears later at the top of Vlad's Castle, where he shoots at Vlad with his Crossbow moments after the spelunker triggers him. Being loaded with a Metal Arrow, the shot kills the normally powerful vampire instantly, giving the spelunker easy access to both the Crown and Vlad's Cape.

In the first level of Temple of Anubis (4-1), Van Horsing can be found in the backlayer of a special room, but only if he helped the spelunker kill Vlad previously in the run.

Van Horsing is cursed in this encounter. Believing his time to be running out, he hands the spelunker the Alien Compass when approached.

The room in 2-1 of Volcana containing the key used to free Van Horsing.

The inside of the room containing the necessary key.

Van Horsing, having killed Vlad in return for freeing him.

Van Horsing, warning the spelunker just before they enter the area below the Lake of Fire in Tide Pool 4-3.

The room containing Van Horsing in 4-1 of Temple of Anubis, if he previously killed Vlad with the spelunker. 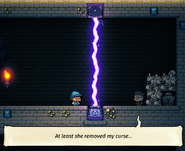 Van Horsing in Madame Tusk's Palace of Pleasure, if he previously gave the spelunker the Alien Compass.