Van Horsing is an NPC in Spelunky 2. He appears to have a history with both Madame Tusk and Vlad.

Van Horsing first appears trapped in a locked cell in Volcana 2-1. The key to his door will be found in another cave somewhere else on the same level, although the Skeleton Key may also be used to free him. Van Horsing will say "Tusk won't be happy about this, but thank you", and will award the player a diamond when approached.

Later in Volcana, when the player reaches Vlad's Castle, they will meet Van Horsing again if he was saved previously in 2-1. He will appear on a ledge on top of the castle. Once Vlad moves into Van Horsing's line of sight, he will shoot him with a crossbow, killing him immediately, following with the line "I've been hunting this fiend for a long time!"

After helping Van Horsing kill Vlad, he can be found in a hidden cave in either Temple of Anubis 4-1 or Tide Pool 4-3.

In Tide Pool 4-3, either Van Horsing, Yang, or Parsley can be found at the bottom of the level's sub area, just outside the door leading to the lava Idol trap. If it is Van Horsing, he will say "I sense danger beyond that door".

Van Horsing can be found in 4-1 of the Temple of Anubis, inside the sub-area of a specific room with a staircase-like shape. He appears to be cursed, likely from a Cat Mummy. If the player meets him, he will say "It's not looking good for me. Take this", and grant the player the Alien Compass, an item used to locate the entrance to the Mothership.

If the player received the Alien Compass, Van Horsing can last be found within Madame Tusk's Palace of Pleasure in Neo Babylon 6-3, although no longer cursed. In the first floor of the basement, he is found to the right of the floor next to the curse pot behind a forcefield. Walking up to him will have him say "At least she lifted my curse.", as Madame Tusk was nice enough to lift his curse, though still imprisoning him again after escaping from Volcana.

Van Horsing killing Vlad after the player baits him out. 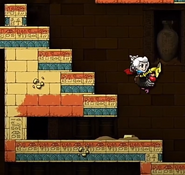 The entrance to the sub area in Temple of Anubis found in 4-1 that will always contain Van Horsing.

Van Horsing giving the player the Alien Compass in Temple of Anubis.

Van Horsing warning the player of their possible fate just outside the door to the Idol trap in Tide Pool 4-3.

Finding Van Horsing in Madame Tusk's Palace of Pleasure after meeting him in The Temple.
Community content is available under CC-BY-SA unless otherwise noted.
Advertisement