Unlockable or hidden rooms and levels that can be found in Spelunky Classic, and the method of unlocking them or accessing them from within the game.. 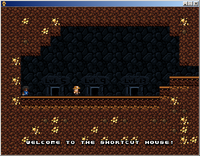 To unlock a shortcut, reach the given tunnel two times, and the second time, pay the Tunnel Man the requested fee. The fee may be split across multiple visits. 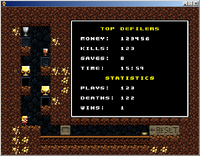 Each of these becomes unlocked after you complete a certain in-game challenge. Unlock all of them and the Tunnel Man becomes a playable character.

The minigame's description reads "Keep yourself and and the Damsel alive for as long as possible!".

To unlock this, win the game without shortcuts in less than 10 minutes. (bronze trophy is 16 minutes, silver trophy is 12 minutes)[1]

The minigame's description reads "Shoot the moving target with your bow and arrows!".

The minigame's description reads "Kill as many angry merchants as you can, before they get you!".

To unlock this, rescue 8 damsels in any one game. (bronze trophy is 4 rescues, silver trophy is 6 rescues)

The changing room lets you switch roles and play the Damsel, while the person who needs saving is the original adventurer.

In one of the levels in the second area, there's a secret exit hidden in the ground that you need to bomb or dig out. If you have the Udjat Eye, it will "blink" and make a sound when you get close; the faster it blinks and emits noise, the closer you are. The Spectacles are useless for finding the Black Market.

Main article: The City of Gold

If you find a gold-colored door in Area 4 (level 14, specifically) while equipped with the Hedjet and wielding the Scepter, then you'll be permitted entry to the City of Gold.

Retrieved from "https://spelunky.fandom.com/wiki/Unlockable_rooms?oldid=17392"
Community content is available under CC-BY-SA unless otherwise noted.