Opening the Locked Chest with the Gold Key in the Dwelling

The Udjat Eye is an item in Spelunky 2.

The Udjat Eye is obtained by opening the Locked Chest with the Gold Key or a Skeleton Key in either levels 1-2 or 1-3 of the Dwelling. The Locked Chest is always located in a backlayer within the exact same room every game, being a small wooden structure somewhere beside/along the level's main path.

As the Spelunker cannot take the Locked Chest outside of its backlayer room, they must always bring the Gold Key or a Skeleton Key to it and never the other way around.

The room which always contains the door to where the Locked Chest resides. 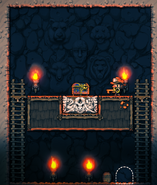 The interior of the Locked Chest room. Inserting the Gold Key reveals the Udjat Eye.

When in the Spelunker's inventory, the Udjat Eye passively reveals gems and items that are hidden in the ground the same way Spectacles can.

The true purpose of the Udjat Eye, however, is to reveal the path to a secret location in either Jungle or Volcana. In Jungle, it is used to discern the entrance to the Black Market, while in Volcana it is used to activate a large Drill, opening the way to Vlad's Castle.