For his future wife/the person who builds the Shortcuts in Spelunky 2, see Terra Tunnel.

Manfred Tunnel, AKA The Tunnel Man is a friendly NPC who digs Shortcuts through the caves in exchange for items.

Note: the Tunnel Man will not appear during a Daily Challenge or Co-op. However during Co-op players will still be able to use shortcuts if they have already been built.

To The Ice Caves 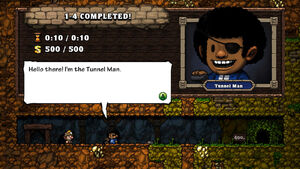 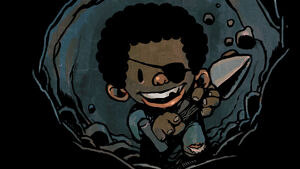 In Spelunky 2, the Tunnel Man is revealed to have started a family with Terra Tunnel. Together, they had a daughter named Margaret Tunnel.

The Tunnel Man does not reappear in Spelunky 2 to build shortcuts for the player, as Terra Tunnel takes that role instead. Instead, he is now a playable character, finally deciding to try his hand at spelunking for the first time.