The City of Gold is a legendary location accessible only by using the Scepter on the Golden Door in 4-2 of Temple of Anubis while the Hedjet/Crown is in the player's possession.

Unlike most levels that occupy a 4x4 grid of rooms, The City of Gold is sized at a 5x5 grid of rooms, giving the player more gold for them to obtain.

As implied, every single block in The City of Gold is made of the shiny material, and will explode into collectable chunks when destroyed. Golden Scarabs are a common sight here, being the only occurrence of them outside of a sub-area or dark level.

Numerous Leprechauns make their home here, making it easy to obtain a Four-leaf Clover here as well as one of their many Pots of Gold found around the level.

Giant Crush Traps are found here as well, also made of solid gold.

Although the City of Gold is a magical place of legend bursting with profit, the player should still exercise caution traveling the area, as multiple Croc Men and Mummies reside here and Giant Crush Traps can easily blend in with the rest of the environment.

There is also a guaranteed Kali Altar spawn in the level, although a massive bull statue is in place of the typical statue of Kali. The bull has an Ankh on its forehead, serving as a hint; sacrificing oneself on the Altar here while the Ankh is in the player's possession will consume it and teleport them and any other players or Hired Hands to the Duat, where they can battle Osiris and Anubis II for the Tablet of Destiny and a Jetpack.

Somewhere in the level, a player can find a specific room containing four Pots of Gold and a Coffin containing the playable Spelunker Au. If the player already unlocked Au, a Hired Hand will be inside instead. 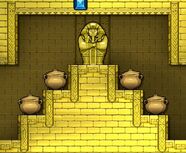