The Black Market is a special back area in The Jungle containing 7 total shops, all manned by Shopkeepers. Here, the player can obtain the Hedjet, a near essential item to progressing further in the game, as it allows entry into The City of Gold and makes the player worthy to pull Excalibur from it's stone.

Like the first game, it will be hidden behind a ground tile, which will have to be destroyed for the Black Market to be entered

Finding without the Udjat Eye

Despite the Udjat Eye being the easiest way to locate the Black Market, there are still other methods to discovering it:

The content of the Black Market is similar to what its incantation from the first game had.

Around the Black Market, a player can find multiple chunks of Treasure and Golden Beetles, allowing for some last minute money accumulation before spending much of it at the many Shops.

At the top level, one can find a coffin containing Nekka the Eagle, along with a Four-leaf Clover.

The Black Market will always have the same main 6 shops:

If the player did not kill or anger Yang, he will be found on the second floor above the Hedjet stall. If the player approaches him, he will tell the player, "I'm just doing a little shopping!" 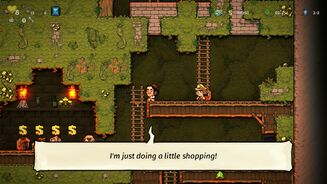 On the very right side of the second floor, a player can find a Shopkeeper selling only one item; the Hedjet for the base price of $40,000. 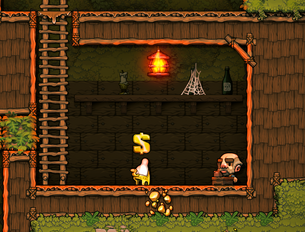 Retrieved from "https://spelunky.fandom.com/wiki/The_Black_Market/2?oldid=20794"
Community content is available under CC-BY-SA unless otherwise noted.