Shops are randomly-generated features that can be found in the caves in almost any level. They are small alcoves dug into the rock, typically manned by a Shopkeeper, selling various items or services.

Shops can appear in any level throughout the caves except for the first floor of the Dwelling (1-1), Olmec's Lair, The City of Gold, Duat, Abzu, Tiamat's Throne, Hundun's Hideaway, and the Cosmic Ocean.

While a Shopkeeper's shop is supposedly guaranteed on level 1-2, the game requires a free space along the main path to the level's exit to spawn the shop. This makes it possible for a Vault, the room containing the Udjat Eye, or Yang's Pen to deny a Shop from spawning in 1-2. Additionally, the shop in 1-2 will never be a Hired Hand Shop, Pet Shop, or Dice House.

As with all other installments of the Spelunky series, the cost of all items and services sold in shops increases as the player progresses through the levels, with prices determined by a standard "base value", plus a "level inflation coefficient".

The formula for pricing remains as:

There are three ways that a player can receive a discount at a Shopkeeper's shop:

The discounts offered by the "Big Spender" title and the Crown stack together, and are never taken away, even if the player angers the Association and gets forgiven.

Players that wear the True Crown will incur a 100% price increase, doubling the prices in Shopkeeper's Shops. This also cancels the Crown and "Big Spender" discounts.

The majority of shops that the player will encounter are manned by members of the Shopkeeper's Association. There are 6 types of shops: General Stores, Clothing Stores, Pet Stores, Gun Stores, Hired Hand Shops, Specialty Shops, and Dice Houses. For more information on the Shopkeepers themselves, including stealing, visit their wiki page. 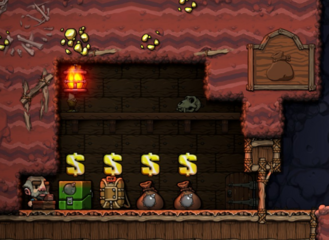 General Stores contain basic resources which although common, can be valuable assets to the player: 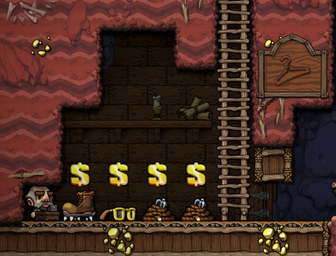 Clothing shops contain various equipment for the player that can be "worn", as well as rope piles: 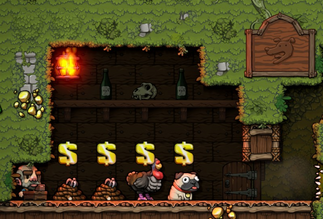 Pet shops contain different varieties of animals, as well as rope piles. The player has the opportunity to purchase pre-tamed mounts, even outside of their naturally spawning habitats. It will always contain two rope piles, a Mount, and a Pet.

A special variant of Pet Shops can be found in The Black Market, which will always contain a Pet and three Rope Piles, as Mounts cannot be taken in or out of the Black Market. 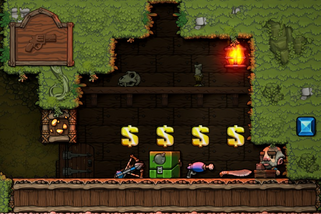 Weapon shops will sell the player a variety of weapons that the player can use to fight enemies with: 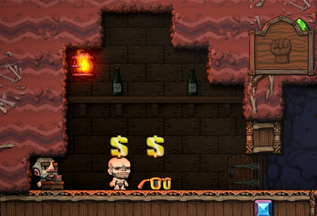 Hired Hand shops will always sell the player a single Hired Hand and one item that may appear in a Clothing Store: 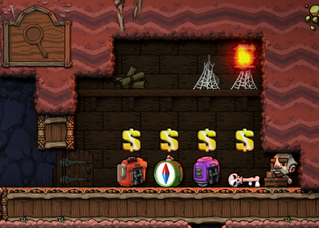 Specialty shops will sell the player a wide variety of items, most notably Backpacks: 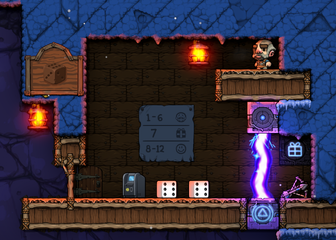 Dice Houses loosely fit the definition of Shops, as the player can instead gamble for money and prizes. In every Dice House is two dice. When the player pays to play the dice game, they may roll both die for a result.

Rolling the same die twice while playing the dice game or taking a die outside of the Dice House will cause the Shopkeeper to anger.

Whipping a die while it is midair will always cause it to roll either a 6 or a 1, with a 50/50 chance. This can be a much more reliable method to roll 7s compared to playing the game normally. 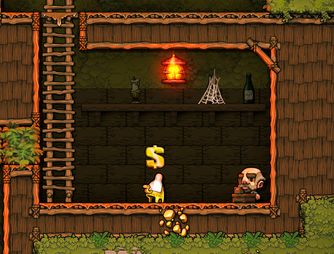 In the Black Market, there is always a Shopkeeper in the very right side of the first floor of shops. He sells only one item, which is always the Hedjet for $40,000, or $36,000 if the player has the "Big Spender" title.

For information on Shops not run by members of the Shopkeeper's Association, see the following pages: