For the information on the shops (and pricing/discounts) themselves, see Shop (2).

Shopkeepers are a vendor NPC in Spelunky 2. They are typically found in their own shops or are seen guarding Vaults.

Stealing from a Shopkeeper or being partially responsible for damaging one or their property angers the Shopkeeper's Association. All Shopkeepers are armed with a Shotgun, and after angering them, attack the player (or in multiplayer, all players) on sight. A wanted poster of the player appears in all shops, and in every non-special level, a Shopkeeper spawns waiting for the player at the main exit door.

Much like all other NPCs, angry Shopkeepers attempt to throw any players that get too close, dealing 1 HP and stunning them in the process (leaving them open to what is likely going to be another throw or Shotgun blast). Shopkeepers have 10 HP, can jump up to three blocks high on their own, are immune to Whip damage, and are only stunned for roughly one second if the Camera is not used on them.

While the Association is angry, all Shopkeepers will initially begin patrolling the ground they stand on, turning around once meeting a ledge. Getting too close to an on guard Shopkeeper prompts only him to begin attacking. Being responsible for hurting a Shopkeeper will switch all Shopkeepers on the level into attack mode, and not just the one they hurt.

If relieved of their Shotgun, Shopkeepers can also pick up and fire a Freeze Ray or Plasma Cannon. They do not pick up any other weapon, such as the Crossbow.

If swallowed by a Mantrap, they simply break free unharmed after a few seconds, although if the Mantrap is killed while the Shopkeeper is in their belly, both die. 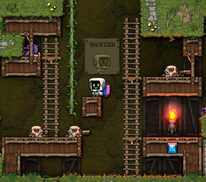 After murdering 5-8 Shopkeepers (or obtaining the sin equivalent), the Shopkeeper's Association begin establishing posse rooms, made of wood containing 2-4 shopkeepers.

Posse rooms always spawn along the main path to the exit door, and may not only spawn in all standard levels, but may also appear levels like The City of Gold. They never spawn in levels that cannot contain an angry shopkeeper at the exit door.

Posse rooms tend to contain small niches in each of their corners, and treasure and Pets may spawn in them. In particularly unfavorable situations, the Curse Pot may spawn in them, which may lead to its accidental destruction by a shotgun blast and the summoning of the Ghost.

It is possible to be forgiven by the Shopkeeper's Association after angering them, allowing back access to their services and stopping Shopkeepers from attacking the player on sight or spawning at level exits.