Pots of Gold are highly valuable objects found at the end of rainbows, seen only with the assistance of a Four-Leaf Clover. Damaging a Pot of Gold will drop a maximum of twenty coins, each worth a base $500.

Attacking a Pot of Gold will drop a number of coins equivalent to the amount of damage it suffered, releasing at most twenty coins before breaking.

As a single coin is worth at least $500, Pots of Gold are highly valuable if one has the time to empty them safely. Combined, the coins dropped from the pot will be worth a total of $10,000, plus $2,500 per area completed.

Pots of Gold will only ever spawn if a Leprechaun has also spawned in the level, and can be found inside of any normal block in the level. If the player has obtained a Four-Leaf Clover, a rainbow will be visible, ending on a certain block. Destroying this block will reveal a Pot of Gold.

While it is still possible to find a Pot of Gold without the help of a Four-leaf Clover, it is highly unlikely. 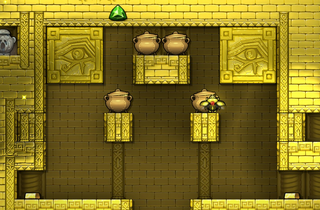 Pots of Gold are of great value to the player if they are in need of money, particularly in The Jungle before The Black Market, where the Gold Coins it drops (worth $12,500) will prove invaluable to affording items.

Much like Crates and Mystery Boxes, Pots of Gold cannot be taken through levels.