Mounts are a rideable type of entity found in the caves. They may be tamed and each have their own special abilities.

Mounts can be found spawning naturally across the caves. They may be found untamed and out in the wild or already pre-tamed by an existing entity. Every mount has 4 HP, with the exception of the Mech, which has 10.

When untamed, Mounts will run around sporadically, and an untamed Rock Dog or Axolotl will attempt to attack the player. They will never try and enter a one tile gap, and will crouch if they have no other option but to do so.

In order to tame a mount, the player must sit on top of them. Doing this will cause the mount to panic, running unpredictably left and right and even off of ledges. After enough time has passed, hearts will appear and the player will have tamed the mount.

Tamed Mounts have a number of functions:

Tamed Mounts can be found being ridden by Cavemen or sold at a Pet Shop. If the mount is tamed by anything, it will remain tamed forever unless killed and brought back to life by a Necromancer.

Cave Turkeys are the most common type of mount found across the caves. They can be found in every single area, and their spawnrate is buffed if the player bought out Yang's Pet Shop.

Pressing the action button while riding on a tamed Cave Turkey will cause it to lurch its head forward, damaging anything that hits it. This has much less range and a slightly longer cooldown compared to the Whip.

Cave Turkeys can activate slow fall after consuming their second jump. This works identically to a Cape and can be used to negate fall damage and safely lower into Spikes. The Cave Turkey's ability to slowfall and double jump makes it comparable to how Vlad's Cape functions.

Killing a Cave Turkey or hitting the corpse of one with a fire or explosive based weapon such as the upgraded Whip from the Powerpack, Torches, or Bombs will turn the turkey into a Cooked Turkey.

Although Cave Turkeys are rather unimpressive compared to the other mounts, the base abilities of a mount that a turkey has can prove incredibly useful to the player, such as the ability to walk on Thorny Vines, double jump, and the fact that it takes damage for the player no matter what when ridden.

Rock Dogs are an extremely dangerous enemy but an incredibly valuable mount. They spawn naturally in Volcana, but can also be found in Pet Shops and within pens in Neo Babylon.

Rock Dogs are completely immune to fire, and will not even flinch if attacked by an attack exclusively made of fire, such the flames of a Fire Bug or the presence of a Magmar. Riders atop Rock Dogs also share this ability. Despite this, they are not immune to Lava and riders wearing a flammable pack item will still explode if attacked by fire.

When untamed, Rock Dogs will fire their fireballs at the player, dealing two damage, igniting any pack items they are wearing, and having the potential to infinitely stun the player until their eventual death.

In order to make players mounting a Rock Dog appear normally, The hitbox for landing on and taming a Rock Dog is slightly elevated compared to all other mounts, making it much more difficult to properly get onto a Rock Dog when attempting to tame one from a diagonal angle.

When tamed, the player can use their fireball attack to easily dispatch of most enemies, burn specific objects, and even cook Cave Turkeys. Note that they do not grant any extra mobility other than its double jump unlike other mounts.

Axolotls are a rather annoying enemy, and can be a dangerous mount if the player does not know what they are doing. They spawn naturally in Tide Pool, but can also be found in Pet Shops and within pens in Neo Babylon.

An untamed Axolotl will fire their bubble attack at the player, trapping them inside of a bubble which cannot be broken out of by the victim and only by contact with an outside force, such as a ceiling. As the player is stunned for a considerable amount of time afterward, this could trap the player in a hard to escape loop and expend a lot of time on The Ghost timer.

A tamed Axolotl can not only use its bubble attack on enemies, but can also Teleport after pressing the jump button again once the double jump has been expended, similar to the Telepack's activation. This acts identically to how a normal Teleporter works.

The Qilin (Pronounced "Chee-Lynn") is a mythical mount spawned from the Ushabti described on the Tablet of Destiny on 6-3.

As the Qilin is automatically tamed when hatching out of the Ushabti, the only way to encounter an untamed Qilin is to bring one to the Sunken City or Cosmic Ocean, and have it die and be resurrected by a Necromancer from the Sun Challenge or from a Temple of Anubis level in the Cosmic Ocean. Utamed Qilins will not attack the player, though will follow all other untamed mount rules.

The Qilin has the ability to shoot fireballs, which act identically to and can be fired faster than Rock Dog fireballs.

The main ability of the Qilin is its power of infinite flight. This acts identically to how a Jetpack flies, only never running out of "fuel". Because of this, the Qilin is the easiest way to ascend Tiamat's Throne and travel to the Sunken City. 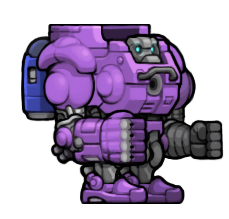 Instances of MOYA-class mechanized armor, or mechs, are a powerful, nonliving mount built by Aliens. They can be found piloted by Aliens in The Ice Caves or by an Olmite in Neo Babylon.

A player will have to make each and every step while moving forward with the mech, giving it a mechanical feeling to movement. Crouching will enable the mech's treads attached to its rear end and within its feet, allowing the player to slide across the floor.

When piloting the mech, a player can use its fist attack by pressing the whip button, destroying any blocks in their way and flinging any enemies aside. Crouching while inside will arm the Plasma Cannon embedded in it's chest, allowing the player to fire it with little recoil.

The mech is also equipped with a Jetpack, although it is no more powerful than the actual item version and so cannot lift the gigantic machine very far off the ground.

If the mech is depleted of its 10 health, then it initiates a self-destruct and will cause a large explosion comparable to a bomb thrown while wearing a Powerpack.

Due to their massive size, mechs cannot be taken outside of the level the player finds them in.

Retrieved from "https://spelunky.fandom.com/wiki/Mount?oldid=22840"
Community content is available under CC-BY-SA unless otherwise noted.