The Mothership is a hidden backlayer area in Spelunky 2's Ice Caves.

The Mothership entrance is always found just out of the camera's reach in The Abyss of the Ice Caves. It will always randomly spawn in one of three different locations every run.

It is easily found by the player with the help of the Alien Compass, but can also be entered via other means.

The Mothership consists of five floors. From bottom to top:

The Shopkeepers that spawn from the Mothership's Generators are technically a separate entity from regular Shopkeepers, and as such attacking or killing them does not anger Shopkeepers for later levels nor does it count towards Criminalus. 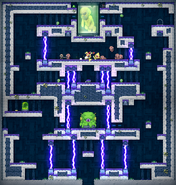 Entering the Mothership with the assistance of the Alien Compass.

All three possible spawn locations for the entrance to the Mothership.