Spelunatic is a Spelunky Mod created by Wiki user TheTylor. It is mostly a graphical modification, replacing the usual Spelunker main character with the Spelunatic. Other graphical changes worth noting are the Spelunatic's companion, the Damsel in her new Burka outfit.

The creator would like to point out that this mod was not intended to offend anyone, and that he personally has no problems with Muslims or the religion of Islam.

Spelunatic, being a minor modification from the original, does not stray too far from the feeling of the original Spelunky, leaving most of the core gameplay the same. The only differences are found in the new character, the Spelunatic, and the larger emphasis placed on bombs. The character does not have the ability to whip like his compatriot the Spelunker, but instead the attack button throws bombs, as the Spelunker's Quick Bomb button originally did. He uses these as his main form of attack, beginning the game with a whopping 32 of them. To compensate for this fact, The Spelunatic only begins with 2 ropes and 2 Hearts as opposed to the Spelunker's 4, making it slightly more challenging than it would have been otherwise. The Game is still currently in it's Beta mode, though all gameplay and graphic changes mentioned above are complete. The Damsel's new look has not been developed enough to be compatible with the Changing Room, with the Damsel reverting back to her old look during gameplay often. The Mod's creator, TheTylor, has stated that he does not intend on working on this mod further unless a significant amount of interest is shown in it, making it likely that this feature will never be fully completed. Other than this, Spelunatic accomplishes what it set out to do: provide a simple gameplay tweak to add a different way to approach one of the best games on the web. 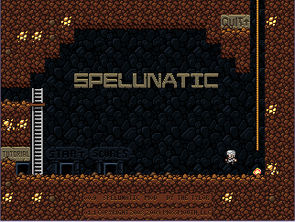 The new title screen for Spelunatic. 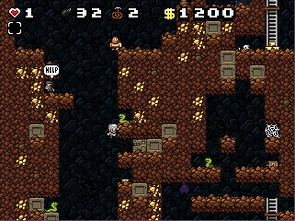 A screenshot of Spelunatic gameplay including the new Damsel. 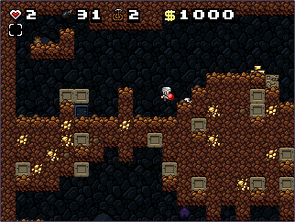 The Spelunatic doing what he does best; flinging bombs all around the caves.
Add a photo to this gallery
Retrieved from "https://spelunky.fandom.com/wiki/Mods:Spelunatic?oldid=12344"
Community content is available under CC-BY-SA unless otherwise noted.