Every king or queen will someday lose their crown.
King Yama returns from Spelunky HD in Spelunky 2 as a hidden NPC, found only in the depths of the mystical Eggplant World. He now goes by the name of the Eggplant King after his transformation. He retains his colossal size, and unlike his original appearance, isn't a threat at all.

King Yama appears much less fierce than he did in Spelunky HD. He has been turned into an Eggplant creature after Tina Flan successfully threw an Eggplant at him in the original game. His once intimidating fists have shriveled up and become harmless. According to the journal entry of the Eggplant Minister, he hasn't given a single order to his followers since he was defeated.

When meeting King Yama at the Eggplant World, he will tell the player, "Every king or queen will someday lose their crown..." He only has 1 HP and is vulnerable to every form of attack. Attacking Yama's face will cause him to say "Eat your vegetables!" before he explodes into 10 pieces of Eggplant Flesh and leaves his Eggplant Crown and skull behind.

If the player is Tina Flan, the Spelunker who originally transformed King Yama into the Eggplant King back in Spelunky HD, killing him will instead cause him to say "Ah, you came to finish the job!"

Yama also makes some brief cameos in Volcana and Deathmatch. Magma pots held by imps contain the former King's face on them, and his face can also be found alongside his former guardians Horse Head and Ox Face in the deathmatch screen between matches.

The Special dialogue that plays when King Yama is killed by Tina Flan, the person who turned him into the Eggplant King in Spelunky HD. 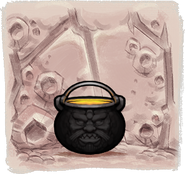 King Yama's face, as engraved on a Magma Pot.

King Yama and his Guardians, as seen in a Deathmatch screen.
Add a photo to this gallery

• Enters second phase when both fists are destroyed, regardless of health.

• Spawns Imps and Magma Men.
• Can be stunned by Camera in his second phase
• His hands may be picked up.

King Yama is the final boss of Spelunky, appearing in his lair on the last level of Hell, level 5-4.

Yama is a gigantic figure - by far the largest enemy seen in the game. A fierce and brutal leader of hell, his massive fists are something to be feared. He is not only extremely powerful, but is also accompanied by a horde of lesser enemies as well as his two henchmen - Horse Head and Ox Face.

Yama's face is the primary target to attack, and after a certain amount of damage he will enter phase 2, where his face will detach from his skull and start flying around the top of the arena.

King Yama attacks when the Spelunker gets near by smashing his fists upon his throne, causing three skulls to fall from the ceiling directly above the Spelunker, or dealing 2 damage if he or the fists themselves hit them.

Yama will also spit Imps out of his mouth and try to use his fists in a punching attack if the Spelunker gets close enough to his head or chest area (such as by climbing onto his shoulders). He may also open his fists, spawning Magma Men that will jump out.

After taking enough damage or having both his fists destroyed, his face will detach from his skull and begin floating around the arena, engulfed in flame, crashing upwards into ceiling to prompt skulls to fall, and spitting fireballs that turn into Magma Men downwards.

If the player moves within two tiles of his head, he will bounce upwards before moving back down to his original position.

Additionally, with enough bombs the player can destroy the bricks of King Yama's Throne which contain a ruby in every block. The 44 rubies that can be mined from the throne are worth a sum of $140,800.

Retrieved from "https://spelunky.fandom.com/wiki/King_Yama?oldid=20770"
Community content is available under CC-BY-SA unless otherwise noted.