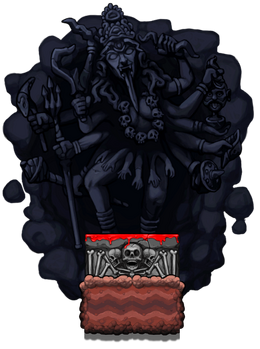 Bloodstained altars dedicated to the fickle goddess Kali can be found scattered throughout the caves in Spelunky 2. Players can earn favor by leaving stunned or dead bodies as offerings upon the altar. However, the destruction of an altar will anger Kali, regardless of if the player was responsible for it or not. This will reduce the player's favor standing with her.

In standard levels, Kali Altars have a 1/14 chance of replacing any room that is not on the main path or is a required spawn, such as the room containing the Locked Chest in the Dwelling.

Making sacrifices to Kali increases the Spelunker's standing with her. Kali's altar works on a point system, with different corpses being worth different amounts, giving more favor for stunned sacrifices than dead ones.

Notable offerings include Pets, who give the most favor out of any other sacrificed entity, as well as Witch Doctors and all eligible Temple of Anubis enemies, who give twice as much favor as a standard enemy would when sacrificed.

Sacrificing a stunned Shopkeeper, Leprechaun or any other entity that would usually drop money/items on death will still drop it when sacrificed.

*It is impossible to legitimately sacrifice this entity in-game, as only Hired Hands and Spelunkers can enter or exit backlayer doors and only Pets may be carried out of sub-areas by these entities. However, their favor value is still in the game's code.

Spelunkers will receive a reward after 8 favor and every multiple of 8 onwards. In Co-op and Online Multiplayer, favor and rewards are shared amongst the team, making it impossible to obtain more than one Kapala from Kali herself, and extras can only be obtained from either the Dwelling Ghist Shop or by using the Clone Gun on one.

At and above 16 favor, Kali will also cure poison and curse when rewards are given. Poison will be cured alongside being given rewards, but curing curse will delay rewards to the next 8 favor interval.

Certain items can be sacrificed to Kali, granting specific rewards instead of favor.

Sacrificing two dice will result in a different result, depending on what number the dice add up to.

If either of the two tiles that make up an altar are destroyed, the player will anger Kali, regardless of whether they caused it or not. Merely destroying the tiles that the altar rests on will also destroy it.

If only one altar tile was destroyed, Kali will still anger, although the player will still be able to offer creatures to the other half of the altar and regain favor.

Destroying an altar is a necessary step for completing Beg's quest and obtaining The True Crown.

When an altar is destroyed:

The following punishments are in addition to the two above:

If the altar destroyed was the second one destroyed during the run:

If the altar destroyed was the third or subsequent one destroyed during the run:

Certain levels in the game are guaranteed to have an altar.

In The City of Gold, a special altar near the middle of the level spawns a massive bull head with an Ankh on its forehead in place of the regular statue of Kali. In addition to functioning as a standard altar, sacrificing oneself on it while the Ankh is in their inventory will consume it and transport them to Duat. Getting sacrificed with the Ankh here will not give favor and will not display a Kali message, so rewards will not be left behind before going to Duat.

Duat also has a special altar containing a gift from Kali that depends on the Spelunker's favor with her. The player cannot sacrifice entities on this altar.

Prior to version 1.20.2a, Kali originally awarded the player a Powerpack if they reached 32 or more favor before entering Duat.

An altar is guaranteed to spawn in Neo Babylon 6-3 in the basement of Madame Tusk's Palace of Pleasure. Sacrificing all of of the guards in the Palace (five upstairs and one in the basement) nets a minimum of 18 favor if they were all killed, which is more than enough to earn a Kapala from 0 favor. This is the only area in the game where an altar can spawn in the backlayer of a level.

If Madame Tusk was killed in Tide Pool earlier in the run, the Palace, and its altar, in 6-3 will not appear. This will allow an altar to randomly appear in the level, but it will not be guaranteed.

Kali has five different moods, depending on the Spelunker's actions. When sacrificing to, or angering Kali, the message will also display her current thoughts of the player, in the following formulas:

The message that appears after sacrificing an entity will change, depending on how they interacted with Kali.