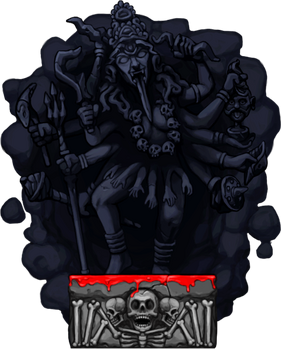 Bloodstained Altars dedicated to the fickle goddess Kali can be found scattered throughout the caves. Players can earn favor by leaving stunned or dead bodies as offerings upon the altar. However, the destruction of an altar will anger Kali, regardless of if the player was responsible for it or not. This will reduce the player's favor standing with her.

In standard levels, Kali Altars have a 1/14 chance of replacing any room that is not on the main path or is a required spawn, such as the room containing the Locked Chest in the Dwelling.

Making sacrifices to Kali will increase the player's standing with her. Kali's altar works on a point system, with different corpses being worth different amounts, giving more favor for stunned sacrifices than dead ones.

Notable offerings include Pets, who give the most favor out of any other sacrificed entity, as well as Witch Doctors and all eligible Temple of Anubis enemies, who give twice as much favor as a standard enemy would when sacrificed.

Sacrificing a stunned Shopkeeper, Leprechaun or any other entity that would usually drop money/items on death will still drop it when sacrificed.

*It is impossible to legitimately sacrifice this entity in-game, as only Hired Hands and Spelunkers can enter or exit sub-area doors and only Pets may be carried out of sub-areas by these entities. However, their favor value is still in the game.

Kali has 5 different moods, depending on the player's actions. When sacrificing to or angering Kali, the message will also display her current thoughts of the player, in the following formulas:

"Kali Accepts Your Sacrifice! She seems [Mood] with you."

When a player changes her mood from Angry to Pleased, it will instead say "She has forgiven you."

If the player sacrifices enough entities, they will receive a reward after certain favor milestones. In Co-op and Online Multiplayer, favor and rewards are shared amongst the team, meaning that it is impossible to earn more than one Kapala from Kali herself, and players must obtain extras from either the Ghist Shopkeeper or by cloning the one given by her.

Some special items can be sacrificed to Kali that grant specific rewards. These do not grant Favor, as the special item is considered the reward.

Sacrificing an Ushabti will result in a companion of some kind, depending on the player's favor. The higher their favor, the better the reward. The message for sacrificing one will read "So you desire a companion? Here you go!" Do keep in mind that for every Ushabti the player sacrifices, their amount of favor is halved, meaning that they cannot be used to gain massive amounts of favor.

Sacrificing two dice will result in a different result, depending on what number the dice add up to.

If either of the two tiles that make up an altar are destroyed, the player will anger Kali, regardless of whether they caused it or not. Merely destroying the tiles that the altar rests on will also destroy it.

If only one altar tile was destroyed, Kali will still anger, although the player will still be able to offer creatures to the altar and regain favor.

When an altar is destroyed:

The following punishments are in addition to the two above:

If the altar destroyed was the second one destroyed during the run:

If the altar destroyed was the third or subsequent one destroyed during the run:

Certain levels in the game are guaranteed to have an altar.

In the City of Gold, a special altar spawns with a unique statue. Instead of a statue of Kali, it will have a massive bullhead with the Ankh on its forehead. It will always spawn in the middle of the level with a a few Sliding Walls surrounding it. It has the same functionality as a normal altar, with the ability to sacrifice creatures on that level. The City of Gold's altar differs in 1 key way from other levels; when a player carrying the Ankh sacrifices themselves on it, they are transported to the Egyptian underworld, known as the Duat.

The Duat also has a special altar containing a gift from Kali that depends on your favor with her. The player cannot sacrifice entities on this altar.

Prior to version 1.20.2a, Kali would award the player a Powerpack if they reached 32 or more favor before entering the Duat.

An altar is guaranteed to spawn on 6-3 (Neo Babylon) in the basement of Madame Tusk's Palace of Pleasure. If the player kills and sacrifices all of the guards in the Palace (5 upstairs and one in the basement), you will be able to get a total of eighteen favor, which is enough to earn a Kapala from 0 favor. This is the only area in the game where an altar can spawn in the sub-area of a level.

Altars will never spawn on 1-1, 1-4, Olmec's Lair, Abzu, Tiamat's Throne, the Eggplant World, Hundun's Hideaway, or in the Cosmic Ocean, due to these areas being the first level, having bosses, or being too far from Kali to have altars constructed. 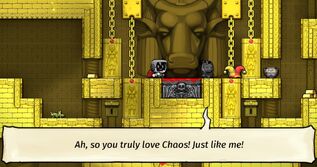 After angering Kali, the player will encounter Beg standing on top of the next altar they found, who has the curse status. He will give the player a bomb bag before teleporting away.

If the player finds another altar after meeting Beg and is themselves cursed, he will acknowledge the player and himself as kindred spirits and give them The True Crown, which teleports the player in the direction they are facing every 22 seconds, but gives them 22 bombs in the process.