File:Ropepile.png
Entry 1 - Rope Pile
Value: 2500
Ropes are an essential tool of the explorer. Great for those hard to reach places!
Ropes are excellent tools for accessing platforms that are too high to reach normally whilst lacking tools such as a jetpack or climbing gloves.

Entry 2 - Bomb Bag
Value: 2500
A bag of three bombs.
Bombs are extremely useful for everything from mining to slaying shop keepers.


File:Bombbox.png
Entry 3 - Bomb Box
Value: 10000
A box that holds twelve bombs.
A lot of bombs are good for a lot of reasons


File:Spectacles.png
Entry 4 - Spectacles
Value: 8000
A nice pair of spectacles that lets you see things you normally wouldn't.
Allows you to see ore and items, not that useful if you can get the Udjat Eye


File:Climbinggloves.png
Entry 5 - Climbing Gloves
Value: 8000
They protect your hands and let you to cling to even the most slippery of walls.
Both positive and negative. Be careful not to accidentally grab onto something that may cause your death! It is oftentimes used in the Haunted Castle secret level to just climb up the outter wall of the castle, allowing one to access the secret character using just one bomb without angering the shopkeepers by killing the Black Knight


File:Pitchersmitt.png
Entry 6 - Pitcher's Mitt
Value: 4000
It improves your throwing and catching skills!
Changes thrown items to travel in a purely linear manner, can be both positive and negative.


File:Spikeshoes.png
Entry 8 - Spike Shoes
Value: 4000
Hiking boots fitted with sharp spikes on their soles.
Allows you to damage enemies that would usually be immune to jumping (Mammoths, Giant Frogs etc.), to kill enemies in one hit that would usually take three (cavemen etc.) and to grip ice. However, unlike in the PC version, XBLA version Maneater will still eat you if you have this and jump on them.


File:Paste.png
Entry 9 - Paste
Value: 3000
Coat your bombs with this and they'll stick to pretty much anything.
Causes your bombs to stick onto enemies or surfaces, incredibly useful for certain foes such as Anubis or King Yama. You can still pick up a sticky bomb aftward and it will not stick to you. However, if a monkey stole it, it will stick to the monkey. If that monkey latches onto you again, you are going to die.


File:Compass.png
Entry 10 - Compass
Value: 3000
The compass always points the way to the exit.
Points at the exit, extremely useful during the Ice Caves


File:Mattock.png
Entry 11 - Mattock
Value: 8000
A sharp tool that's great for digging, but the craftsmanship is shoddy..
Allows you to break terrain, will break after certain use (Rumor to be 5% odd of breaking on each use) currently can be abused with a glitch


File:Boomerang.png
Entry 12 - Boomerang
Value: 7000
A popular weapon of tiki men. It (almost) always comes back!
A good reusable projectile weapon. It is one of the only item that will not cause damage when you slides to hang on the edge.


File:Machete.png
Entry 13 - Machete
Value: 7000
It slices, it dices, it cuts through monsters like stale bread!
A decent melee weapon, capable of killing a Shop Keeper without allowing them to retaliate by causing stun.


File:Crysknife.png
Entry 14 - Crysknife
Value: Not purchasable
A razor-sharp blade fashioned from the tooth of a worm. It replaces your whip.
An incredibly powerful weapon obtained within the Worm. Causes attacked enemies to explode violently meaning you cannot make sacrifices.


File:Webgun.png
Entry 15 - Webgun
Value: 2000
A gun that shoots sticky spider webs.
A weapon that stops foes briefly in their tracks and allows for some interesting tricks if used correctly.


File:Shotgun.png
Entry 16 - Shotgun
Value: 15000
Your typical 12-gauge shotgun.
An extremely versatile weapon that can be obtained quickly from a shopkeeper. Obtainable for the cost of one bomb during Restless Dead jungle levels. Causes a slight bit of recoil that might push you into dangerous position


File:Freezeray.png
Entry 17 - Freeze Ray
Value: 12000
A blast from this will freeze anything solid.
A weapon that freezes foes solid allowing for a quick dispatch via jumping. Useful for killing the shopkeeper before he can attack you


File:Plasmacannon.png
Entry 18 - Plasma Cannon
Value: Not Purchasable
The height of alien weapon design. This thing packs a punch!
Shoots explosive rounds which can result in the death of anything including the player. The explosive will break walls, and upon firing, there will be a large recoil that knock the player back about 2 blocks.


File:Camera.png
Entry 19 - Camera
Value: 10000
The most expensive camera on the market. Say cheese!
Can stun the Ghost by causing it to strike a sexy pose and instantly dispatch undead enemies and bats. Lights up dark areas momentarily. It will stun most enemies as well.


File:Teleporter.png
Entry 20 - Teleporter
Value: 10000
A piece of futuristic technology! But it hasn't been perfected yet...
Teimports the player forward 4 to 8 tiles horizontally and within 3 tiles vertically, often causes death if misused. Can teleport upward, or downward while in midair. Will kill player instantly if you teleport into a block. Due to the random nature of it, not recommanded for real use.


File:Parachute.png
Entry 21 - Parachute
Value: 2000
It will deploy automatically whenever you fall far enough to hurt yourself.

Entry 22 - Cape
Value: 12000
It looks dashing it also lets you float in the air.
An excellent mobility tool.


File:Jetpack.png
Entry 23 - Jetpack
Value: 20000
The coolest way to travel. Fuel replenishes while you're on the ground.
Arguably the best mobility tool in the game.


File:Shield.png
Entry 24 - Shield
Value: Not purchasable
The ultimate in protective armor! Even a cannonball couldn't get through this.
Crushes enemies and items against walls and reflects projectiles. Found within the Haunted Castle, in the possession of the Black Knight.


File:Idol.png
Entry 26 - Idol
Value: 5000
A golden statue guarded by deadly traps. Bring it to the exit for a big reward!
Can be sold to shopkeepers or carried to an exit for money depending on level depth. 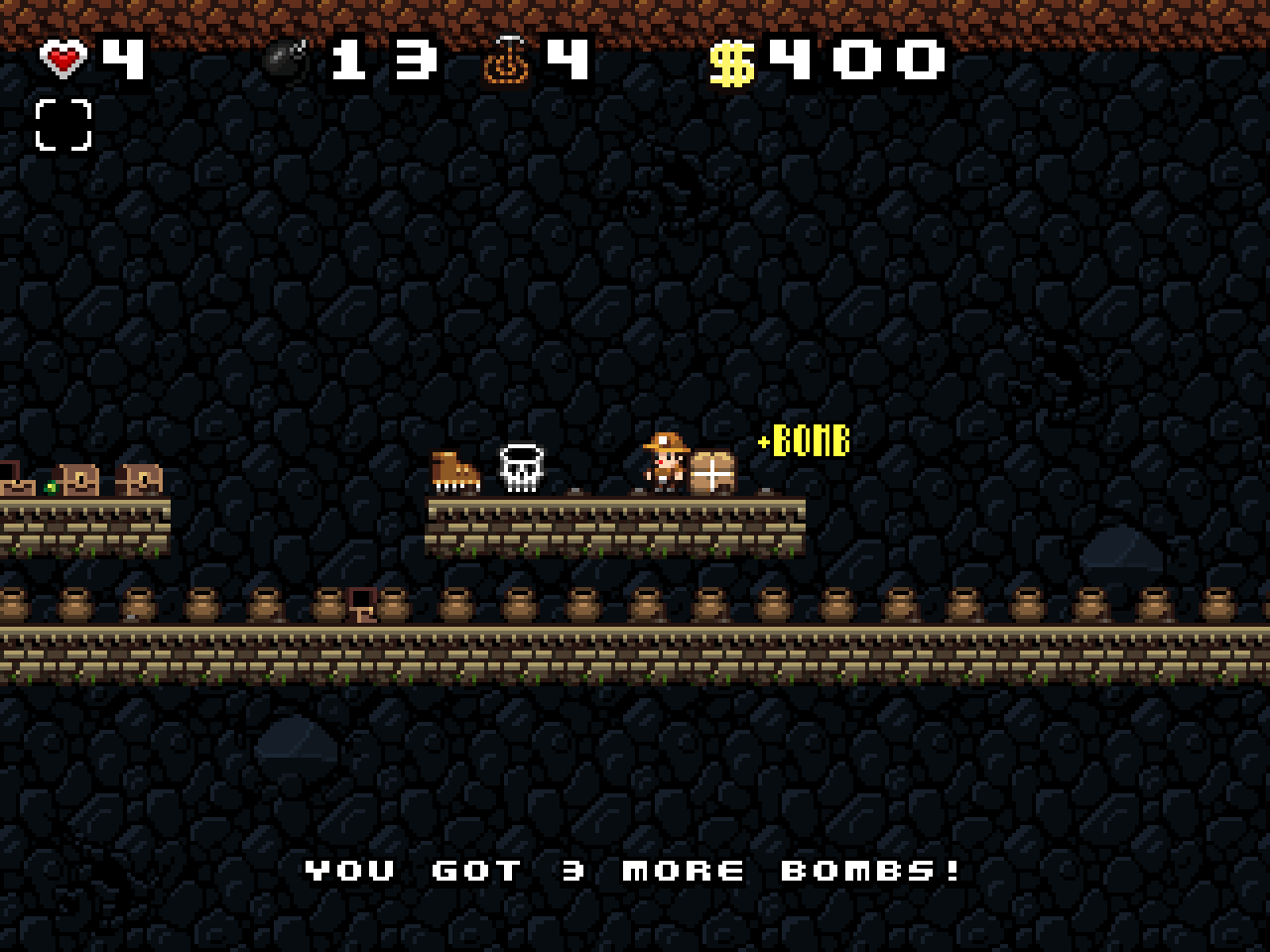 Entry 27 - Kapala
Value: Not purchasable
A cup made from a human skull. It's used in bloody rituals.
Granted by Kali for two damsels or equivalent, grants HP in exchange for collected blood drops.


File:Udjateye.png
Entry 28 - Udjat eye
Value: Not Purchasable
The Eye is an ancient symbol of royal power. Does it have any other purpose?
Shows items in terrain and makes an audiovisual cue based on how close you are to the Black Market. Used on the road to the City of Gold and Hell.

File:Ankh.png
Entry 29 - Ankh
Value: 50000
A magical artifact that symbolizes eternal life.
Restores you to life with 4HP should you die and allows access to the Hedjet should you kill yourself on a level with a Moai Statue.


File:Hedjet.png
Entry 30 - Hedjet
Value: Not Purchasable
The white crown of pharaohs. It grants its wearer access to secret areas.
Unlike the PC version the Hedjet in Spelunky on XBLA has no effect on the game other than allowing access to the City of Gold


File:Sceptre.png
Entry 31 - Sceptre
Value: Not Purchasable
The person who wields the staff of Anubis has control over life and death.
Launches homing psychic ring attacks, highly likely to hit the player as well as enemies. If the closest enemy is on the opposite side of where the player is facing, upon firing, the ring will change direction and kill the player when it go through the player to chase the enemy. Not recommanded unless you have no choice.


File:Bookofthedead.png
Entry 32 - Book of the Dead (Necronomicon)
Value: Not Purchasable
Guarded by Anubis II in the city of Gold. It opens the entrance to the underworld.
Allows access to Hell and summons Anubis II who will chase you across levels. See Olmec's Chamber for more information on usage.


File:Vladscape.png
Entry 33 - Vlad's Cape
Value: Not Purchasable
The bloody cape of Vlad the Impaler. It's even more dashing than regular capes.
Allows you to double jump and then hover as using a normal cape.


File:Vladsamulet.png
Entry 32 - Vlad's Amulet
Value: Not Purchasable
A magical amulet that protects its owner from fire.
Makes the player immune to lava hazards and magma men, obtained in Vlad's Castle on 5-1.

Retrieved from "https://spelunky.fandom.com/wiki/Items?oldid=9457"
Community content is available under CC-BY-SA unless otherwise noted.