The Ghost is an enemy in Spelunky 2.

After 3 minutes have passed in a level, The Ghost will spawn in from the side of the level closest to a player. Its arrival is marked by the text "A terrible chill runs up your spine!" followed by a thick grey fog and the level's music lowering pitch and slowing down.

The Ghost passes through all tiles and entities with impunity and in and out of backlayers to chase the nearest player. It is impossible to damage, and players die instantly from touching it. The Ghost is approximately twice as fast as her original counterpart in Spelunky HD.

The Ghost's timer can be extended to 5 minutes if a Four-Leaf Clover is picked up. It spawns 30 seconds earlier if a player is Cursed, and another 30 seconds earlier for each dead player in multiplayer. The Ghost immediately spawns if the level's Curse Pot is destroyed, or if the player still has the Punish Ball given from destroying the third Kali Altar in a run chained to their leg.

The Ghost can be temporarily stunned by attacking it with a Camera, causing it to change appearance and freeze in place for a short period.

The Ghost targets Hired Hands and the Eggplant Child as if they were players, spawning by them if they are closer to the edge of the screen than the player is.

If playing multiplayer, dead players can blow the Ghost away to momentarily delay it.

The Ghost does not appear in the Cosmic Ocean, as instead a second Celestial Jelly will spawn once the player's time on a level is up.

After 30 seconds, the ghosts will split into 4 even smaller ghosts that resemble Ghists. Each ghost also has their own AI patterns.

The Ghost's ambience. Heard throughout all forms.

The sad ghost, while the ghost is split into two.

The small, but angry ghost, slowly pursuing the player.

The spooked ghost, attempting to circle the player.

The happy ghost while the ghost is split into four, likely out in the distance.

If The Ghost passes through large rubies, sapphires or emeralds lying on the ground, they will be transmuted into Diamonds worth several times the value of the ordinary jewels. Gems still embedded in rock or in Chests will not be affected. Unearthing jewels and leading the Ghost over them deliberately is a strategy known as ghosting, and can result in astronomically high scores if done properly.

The key to ghosting is proper planning; the player should make sure of always having a way out from the Ghost and anticipating and taking advantage of when she splits into two and four ghosts.

The presence of two or four smaller ghosts may also allow for different ghosting strategies, particularly with the Happy Ghost or the smaller Spooked Ghost, whose AI of circling the player may result in easier production of diamonds.

Ghosting requires patience and practice, but if done in an area with a high amount of gems, such as Shopkeeper Vaults or the one found in Madame Tusk's Palace of Pleasure, the player can leave the level with massive amounts of money. 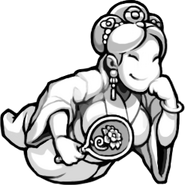 The Ghost when a Camera is used on it. 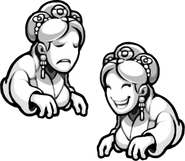 The Ghost's two halves when a Camera is used on them. 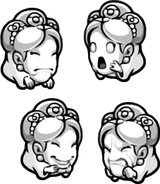 The Ghost's four parts when a camera is used on each.

The Empress's grave in Eggplant World.

Taking a picture of the Empress's grave with a Camera, revealing a familiar face.
Community content is available under CC-BY-SA unless otherwise noted.
Advertisement