Entering a locked door in 7-1 of the Sunken City

The Eggplant World is the most secretive area in all of Spelunky 2, and reaching it may take a lot of skill and luck. It is what remains of the palace of King Yama, now overtaken by Eggplants after his defeat at the hands of Tina Flan.

There are multiple hoops that a Spelunker must jump through in order to reach the Eggplant World.

Eggplants are obtained by offering a Present to a Kali Altar. This will display the text "Kali enjoys a good mystery!" as the Eggplant is awarded.

Step 2: Take the Eggplant to The Moai

After reaching the Ice Caves, a Spelunker must deposit the Eggplant at the purple stained altar next to the Moai. The Moai and altar will always spawn on the level just below the level containing the entrance.

Placing the Eggplant upon the purple altar next to the Moai opens it, leading into a small room where the Eggplant Child is found sleeping.

Step 3: Take the Eggplant Child to the Sunken City

Once a player has awoken the Eggplant Child within the Moai in the Ice Caves, they must accompany them all the way to the Sunken City. Players should either have the Tablet of Destiny in their inventory to obtain the Qilin, or perform a Qilin Skip to get past the lasers above Tiamat's Throne.

Step 4: Rest the Eggplant Child upon the Mother Statue in Sunken City

Once the player has made it with the Eggplant Child into the Sunken City safely, they should ensure that they make it to the Mother Statue found somewhere safely. When the child is placed upon the arms of the statue, the door to the Eggplant World will open.

The Eggplant World will greet the player with the level feeling "You feel strangely at peace." The lowest level of the area is covered in a thick grey fog, similar to what appears when The Ghost spawns or when the player is inside of a level with the Restless Dead Level Feeling.

The level's geography consists of purple colored Water and pagoda-type structures with Sliding Walls occasionally attached, similar to what appears in Tide Pool. The only creatures that spawn naturally in the Eggplant World are Eggplups and Eggplant Ministers, who are both passive and cannot damage the player.

The Ghost will never spawn in the Eggplant World naturally.

Hidden behind a specific tile of a specific room of the level, there is an entrance to a Ghist Shopkeeper's store. It functions identically to the one found in 1-4 of the Dwelling, although the Clone Gun has a chance of dropping from one of the Presents instead of the Kapala. The player must be cursed to enter.

The grave of the Empress can be found before Yama's Throne. Interacting with it will display the text "Here lies the Empress. May she finally find peace." A Diamond will always spawn in the tile just below the grave, and taking a picture of the grave with the Camera will cause The Ghost of the Empress to appear. 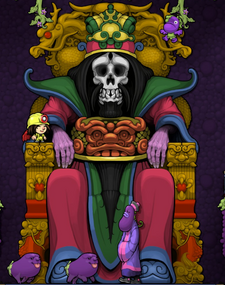 At the top of the level, the player will find the Eggplant King Yama on his throne. It is revealed that King Yama was canonically defeated in the original Spelunky HD adventure when Tina Flan threw an Eggplant at him.

As the player approaches, he will tell them "Every king or queen will someday lose their crown..."

Much like the original King Yama, the player may stand on his knees, shoulders, and the armrests of his throne. Yama has 1 HP and is vulnerable to all attacks.

Killing King Yama will prompt him to say "Eat your vegetables!" as he explodes into 10 pieces of Eggplant Flesh and the Eggplant Crown. The music in the Eggplant World will heavily slow down and distort after killing King Yama for the remainder of the time that the player spends there.

The level's exit can be found to the left or right of the Eggplant King.

Strategies for Reaching the Eggplant World

King Yama after meeting the player.

The special dialogue that plays when King Yama is killed by Tina Flan, the person who turned him into the Eggplant King in Spelunky HD.

Visiting the grave of The Empress.

The Empress revealing herself after a player used the Camera at her grave. 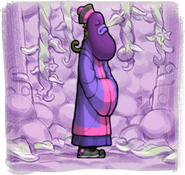 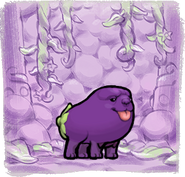 The specific room that the Ghist shopkeeper can spawn in. The entrance to his store is boxed in yellow.
Add a photo to this gallery
Retrieved from "https://spelunky.fandom.com/wiki/Eggplant_World?oldid=23674"
Community content is available under CC-BY-SA unless otherwise noted.