Dwelling is the first area in Spelunky 2, accessible via the main doorway in the Camp.

Dwelling consists of 4 levels, ending with a choice of proceeding to either Jungle or Volcana. Its tight corridors and many enemies quickly and indiscriminately dispatch of careless delvers, regardless of skill level.

Much like Tide Pool, the Dwelling has a special marking on the wall beside most hidden backlayer entrances, being a set of three hand prints (

). This can be used to easily locate hidden backlayers.

Only two unique Level Feelings can occur in Dwelling, being "dark" and "echo" levels, and only on either 1-2 or 1-3. 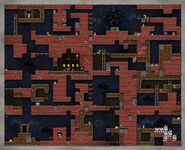 A full level of Dwelling.

The apperance of Kali Altars in Dwelling.

The arena containing Quillback in 1-4.