Picking up a Damsel will cause them to pass out in the Spelunker's arms, becoming stunned for several seconds after being set down. A Damsel who has been dropped or thrown will eventually come to their senses and begin running around in panic, and will behave in the same way if they take damage.

A panicking Damsel will run blindly forwards, only turning if they hit a wall. They will also fall off ledges, which makes them prone to falling into Spikes and other hazards.

For bringing them to a level exit, they will reward the player with a kiss when you leave, increasing their health by one point.

Damsels will always give the player a kiss in the exit tunnel after you rescue them, even if they leave the level through a different exit than the one you sent the Damsel into. This can happen on levels that have multiple exits, such as the level with the hidden Black Market entrance. This also includes allowing the Damsel to be eaten alive by the Worm.

Attacking the Damsel does not ruin the chance of getting a kiss for saving them so long as they are still alive, so whipping them once or twice in an enclosed space is a good way to collect blood for the Kapala and potentially earn an extra health point from the Damsel's blood.

Damsels are also tied with the The Black Knight, Hired Hands and Spelunkers for the most favor gained when sacrificed at a Kali Altar (8), so sacrificing them is often a good way to obtain the Kapala.

Though the player is not allowed to take a Damsel corpse through a regular exit, it can still be used to trigger the Worm to take the player to the Worm level.

Dead Damsels can still be carried and thrown at enemies. However, no reward is given for carrying their corpse to the end of the level, making a dead Damsel a prime target for sacrifice at a Kali Altar.

Additionally, it's possible to buy the Damsel if the player uses the purchase button while holding the Damsel. Buying the Damsel outright will cost 50% more than the price of a single kiss. Although this is normally considered a waste of money, it can be a good option if the player wants to sacrifice the Damsel on a Kali Altar or trigger the Worm without angering Shopkeepers.

As lead developer Derek Yu was uncertain with the idea of the female damsel as a whole but wanted to stay faithful to the original game, Spelunky Classic, he decided to "even the odds", adding various Damsels in addition to the female damsel. 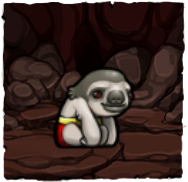 There is also a small chance of the Damsel appearing in the level as the Sloth, though the odds of happening are approximately one every 2500 or so runs, it's a very rare event.