For their item selling counterparts, see: Caveman Shopkeeper (2) Cavemen are an enemy in Spelunky 2.

Occasionally, Cavemen can be found encased in ice tiles in Ice Caves or their corpses can be found in backlayers, with a Ghist bound to it, or can be selling goods as a Caveman Shopkeeper (2).

Cavemen walk around back and forth, turning around if they meet a ledge. If they see the spelunker, they yell and charge in their direction, running off ledges and only calming down if stunned or falling into a one tile wide gap. They deal 1 HP on contact.

Cavemen are limited to what they can see in front of them, remaining passive as for long as the spelunker is not in their line of sight.

Cavemen can interact with other Cavemen, Tiki Men, or Witch Doctors that they encounter and have what appears to be a conversation, albeit consisting of caveman grunts and spitting.

In some areas, Cavemen can be found asleep. Getting too close to a sleeping Caveman while running (walking doesn’t wake him up) has him blink 1-3 times before getting up and charging in the direction of the spelunker. Explosions also wake up cavemen.

Throughout the caves, Cavemen can be found riding Mounts. While in Volcana they can be seen riding Rock Dogs and in Tide Pool they can be seen riding Axolotls, they can be found riding Cave Turkeys in any area except Dwelling or Cosmic Ocean. This includes areas where it would be strange to encounter Cavemen, such as Duat. If they spot the spelunker, they command their mount to fire at them if possible, otherwise charging at them at wild speeds. Relieving the mount of its Caveman rider leaves it tamed and passive to the player. The caveman can also be spotted frozen inside of a block of ice in the Ice Caves.

Cavemen can pick up items and treasure in front of them when in their passive state, but do not throw or use them. This can sometimes be detrimental to their well being, such as picking up an Idol rigged to a trap. They can also put on Backwear, but also do not think to utilize them.

When provoked, a charging caveman can trip over items, being momentarily stunned and dropping any items they were holding. If they were holding a Shotgun or Freeze Ray, tripping causes their finger to slip over the trigger, unknowingly firing the weapon. 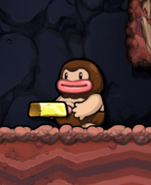 A Caveman flexing his wealth 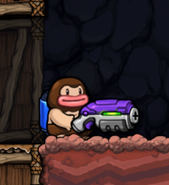 A Caveman with more power than he can comprehend. 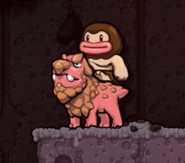 A Caveman riding a Rock Dog.

Cavemen sleeping beside a fire. 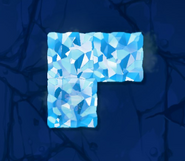