Cameras are a type of Weapon in Spelunky 2.

It is usually found inside shops, but can also be found inside of crates with a 1.15% chance of appearing. A Camera is a guaranteed drop from Great Humphead.

When used, Cameras cause a bright flash and affects a large square about 1 and a half tiles in front of the player with a 3x3 tile area of effect.

Cameras do not normally deal damage to enemies, instead stunning them if in its radius. Using a camera on an already stunned enemy refreshes their stun timer. The flash works even through walls, and can be used to see in dark levels and in background sections due to it briefly illuminating the area.

It also has a variety of unique interactions with different enemies and objects:

Enemies that are not stunned, killed, or otherwise unaffected by the Camera are immune to its effects, such as Pangxie, Anubis, the Yeti King/Queen, and Celestial Jellies.

After being used, there is a delay of 49 frames (.82 seconds), or 24 frames (.4 seconds) with a Powerpack equipped, before the Camera can be used again.

Freezing the Ghost in place with a Camera.

Killing a Ghist with the camera. 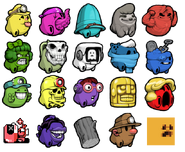 All special poses done by Spelunker Ghosts when a picture of them is taken by the Camera.