The Black Market is a secret area found in Spelunky 2's Jungle.

The Black Market serves as the alternative to Vlad's Castle, a secret area in Volcana containing the Crown.

The Black Market is found in the backlayer of 2-2, 2-3, or 2-4 of Jungle, accessed via a hidden doorway found behind a solid tile. If the Spelunker has the Udjat Eye, it will begin audibly "blinking" when they get within 10 tiles of the entrance. Akin to a "Warmer/Colder" game, the Eye will blink faster the closer the Spelunker is to the entrance.

It is also possible to find the Black Market's entrance without the help of the Udjat Eye, as there are numerous details and level generation quirks that help allude to its location, such as the Moon Challenge never spawning on the same level as it.

The very top of the Black Market has a Four-leaf Clover, as well as a small brick structure on either the left or right side with a Coffin unlocking Nekka the Eagle when opened for the first time.

The main portion of the Black Market features a grid of the same six shops, all manned by Shopkeepers:

The seventh and final shop found in the top right, selling the Hedjet, a valuable quest item, for the price of $40,000.

All wares are sold for their base price without adding a level inflation coefficient, making them as cheap as they would be in 1-2. For example, a Jetpack would be sold for $20,000, rather than $28,000-$32,000. The 10% "Big Spender" discount attained from buying out a Shop in a previous level applies to all shops in the Black Market, although the discount cannot be earned from buying out shops in the Black Market itself.

If the Spelunker did not kill or anger Yang, he can be found on the second floor above the Hedjet Shop. If approached, he will say "I'm just doing a little shopping!"

The exit to the Black Market can be found in either the bottom left or right corner of the area. This doorway leads back out to the frontlayer, with a short segment of the Jungle leading towards a secondary exit door that leads to the next level.

The entrance to the Black Market (center), hidden under a grass tile. 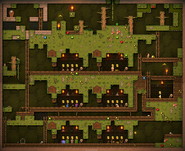 A full instance of the Black Market. 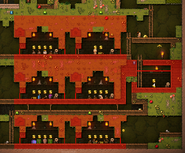 Tiles colored in red anger Shopkeepers if destroyed. Red lines indicate the furthest an unpaid item can be taken before being considered theft.

Yang seeing the Spelunker again in the Black Market.