Arrows are a projectile in Spelunky 2. Arrows can be made of metal, or tipped with a deadly Poison. Unlike most projectiles, they deal two damage instead of one on hit, but break if it is not powerful enough to destroy its target.

Stone Arrows are most commonly found inside of Arrow Traps in the Dwelling or Sunken City. They can also be obtained if a player has 16 favor or more with Kali and offers a rock to an Altar.

When an arrow hits an enemy that leaves no corpse or stunned body, such as Bats, Spiders, or even Lizards at 2 HP or less, the arrow will continue flying forward. Otherwise, hitting an enemy with a stone arrow will break the arrow, leaving behind only the hilt. This now-broken arrow can still be used to trigger other Arrow Traps, and to stun enemies for a brief period of time.

If a stone arrow is shot using an Arrow Trap, Crossbow, or Hou Yi's Bow, it will fly straight forward until it hits a body or a wall, identical to how it would be thrown by a player with a Pitcher's Mitt.

Unlike metal arrows, stone arrows can be set alight while they are traveling through the air, which increases their damage to 3 and allows them to ignite anything they hit. Vampires and Vlad will instantly die to an alight stone arrow.

Stone arrows are lit by default if they're shot out of an Arrow Trap in a dark level, but they can also be lit if thrown or shot through a torch or other source of fire. The Stars Challenge takes advantage of this quirk by giving the player a stone arrow and crossbow to help them complete the challenge. 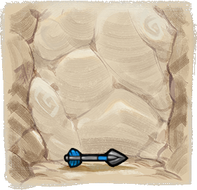 Metal Arrows are a special variant of Stone Arrows that do not break, regardless of what they are thrown at. If thrown at a body, it will instead bounce off of it opposite the direction it was originally sent from.

If a Metal Arrow is shot using a Crossbow or Hou Yi's Bow, not only will it have Pitcher's Mitt-like properties as it flies through the air, but upon making contact with a wall, it will stick to it for a short time and allow the player to stand on top of it. After approximately 3 seconds or if the Metal Arrow is whipped, it will fall to the ground.

Much like lit stone arrows, metal arrows have the special property of instakilling Vampires and Vlad, leading some to believe that they are made of silver, believed to be a real life weakness of Vampires in folklore, much like Werewolves.

Because of its Vampire killing properties, a Metal Arrow and Crossbow is the weapon of choice for Van Horsing.

The Arrow of Light has the same functionality as a Metal Arrow, albeit it deals a whopping 10 damage and may only be fired with Hou Yi's Bow. 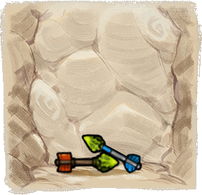 If an arrow hits a poison enemy, such as a Hermit Crab, Scorpion, or Cobra and doesn't break, it will turn poison-tipped, and the next target it hits will leave them poisoned.

Arrows will lose their poison tip if they hit an entity that leaves a corpse behind or if they are set alight.

Due to the incredibly long time it takes for poison to kill entities (30 seconds for 1 damage), it is generally only more of a hazard to the Spelunker, and only has applications in finishing off weak enemies or waiting large amounts of time to slowly kill higher-health entities.